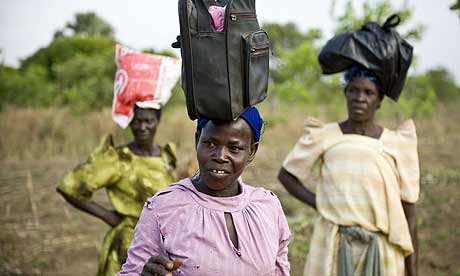 Shots from the Guardian site, as I forgot my camera last night...

Last night I went to a seminar organised by Sound Delivery and Third Sector PR about the end of the Guardian’s Katine project.

For those who don’t know, Katine was the first attempt by a major media organisation (that I’m aware of) to answer critics who say foreign correspondents never do follow ups. Over three years a veritable army of some of the UK’s best global affairs  reporters descended at intervals upon a small Ugandan village called Katine.

The plan was to detail the progress of a major investment by Amref and give some genuine insight into the lives of the people living there. Community stories would be told, and readers would gain some understanding of the process and impact of international development through NGOs. By the end of the project, they had two talented African journalists living in or near Katine full time, and were posting up to 10 stories a week from the community.

It was a brave project, which is evolving into the broader coverage of the new Global Development site. I think was broadly successful. I’m not sure it’s settled the argument about how writers in this field should work though – Liz Ford, who edits the Katine site and is launching Global Development with Madeleine Bunting, gave the talk. Even with the backing of the Guardian and Barclays et al, the key problems she described two problems which will be familiar to all journalists and communications officers who try to get stories about development projects into the news.

I won’t quote extensively, but they boiled down to problems with  getting development stories into the main paper without an additional hook, and getting usable materials back from the field – especially video.

I think the latter especially highlights the fact that  despite the rising power of citizen journalism as a tool for getting information out of poor areas traditionally underserved by the media in the UK, it’s not quite time to retire skilled foreign correspondents just yet. More than ever we need media literate advocates to help get voices heard, and a UK audience has an expectation of presentation which it’s unrealistic to expect someone who doesn’t even own a TV to be able to produce.

Still, Liz did say she’s confident that in the future it could be possible to do something like Katine without sending a single British reporter overseas, by working closely with intermediary charities like Panos (who train overseas media and help set up community newspapers and radio in the developing world).

Hopefully there’ll be some more experiments in reporting along those lines making it onto the new site soon. In the meantime, read this feature there by my current favourite academic.

Thanks for the write-up, Adam :) Glad you enjoyed the evening. Just a quick note – you’ve linked to a recruitment agency, not us! We are a Facebook based third sector comms networking group (set up by me in 2007), and you can find us here: http://www.facebook.com/group.php?gid=2402966794&v (FB won’t let me shorten the name – sorry).

you should always be careful with recruitment agencies because some of them are just scammers *:;