Well, we actually moved last Friday, after a couple of weeks of hell knowing that our contract was up on the old place in Melksham, and the solicitors kept finding problems in the leasehold with the new flat in Shoreham-by-Sea. A lot of begging all sides not to make us homeless seemed to do the trick. That and lots of money, of course, in extra fees and charges to make it happen.

After a week of unpacking the wall of boxes is finally shrinking, having gone from this: 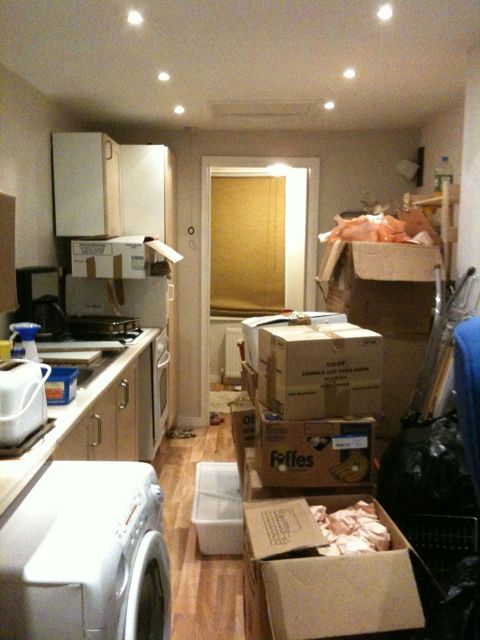 The kitchen after the removal men left. Unexpected finds = a hole in the bottom of the oven, and general skank in the fridge. 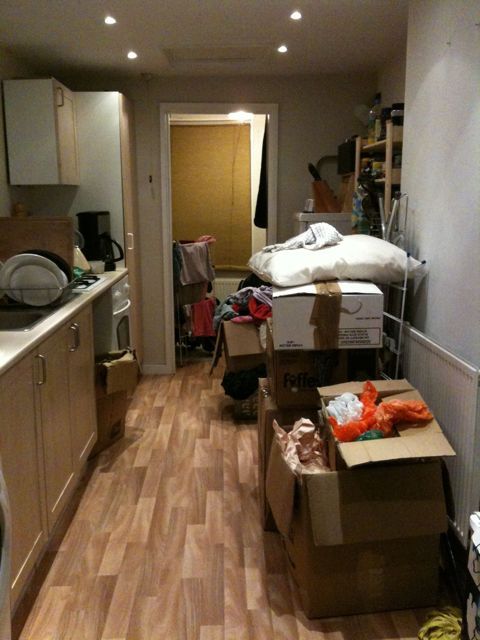 See, almost habitable. And cooking is now possible. Wasn't expecting all the shelving to have been removed though.

There is still this though: It's only one wall of many, but at least it's almost clear.

Although that wall was covered two boxes deep when we first started.

We also now own a dishwasher, oven and fridge we didn’t think we’d need to.

Things have been slow because Tamsin fell down the stairs on our first night here and dislocated her arm, and I’m unable to actually work in my office yet as there’s no internet connection over there. Still, the flat is finally starting to feel like home, and I’m getting over the buyer’s remorse (it’s too small/dangerous/expensive/falling apart to have been a good idea).

Being by the sea is as ace as expected. Even if I’ve only been down to the beach once. Poor Tabby is having a bit of a hard time, all the things we promised her (like flying kites on the beach) have had to be postponed while we struggle to get on top of things.

I’m working on a proper valedictory post for Bath coming soon, along with a full and exciting explanation of the new office. Hopefully before too long I’ll be able to focus back on the developmental journalism and creative writing that have been put on hold for a while.