So, this is democracy then You could make an incredible road movie based on the drive from Jalalabat (or Jalalabad, the English spelling seems a little indiscriminate) to Osh. Vim Venders would have an great time lingering over the scenery.

In the late Autumn sun, it has the air of an Oriental paradise. Children sit in the fields after school wearing colourful uniforms, young boys herd cattle down the middle of the road, and men in tall felt hats pause by streams before moving on to lazily scythe down corn stalks still standing from the recent harvest.

And always, always there are incredible mountains in the background. Apparently the skiing season is fantastic, so I’m told.

This is no pastoral idyll, though. It’s more like a glimpse of life after the Apocalypse.

Before the collapse of the Soviet Union, people here didn’t need to use ox carts to haul corn picked by hand around: they had tractors and combine harvesters. The children were taken to school in buses, rather than walking for miles through fields. Teachers weren’t in such short supply that if a group tried to kidnap a colleague’s daughters for marriage, they’d be hauled off to the gulag rather than tolerated for the sake of keeping fragile, failing communities together.

It seems incredible that we celebrated the 20th anniversary of the fall of the Berlin Wall just a month or so ago. It took less than a generation without law and order for standards of morality – particularly where the standing of women is concerned – to vanish in many rural areas.

Even the warm autumn sun has something of the lie about it. In the winter, the temperature drops to 30 below zero, and people are forced to retreat to the back rooms of their wood and straw shacks, away from the glassless windows and hope that the tin roofs don’t let the snow in.

With no decent housing, no industry to speak of and a low quality of education for the poor, what’s been lost here is knowledge, and it takes a painful toll on all, but especially on women.

Women in the poor districts within towns and villages describe themselves as “scared and shy”, because all they know is to shut up and be subservient to men and their terrifying mothers in law. They accept being kidnapped as a way of life, and would rather families sort out local disputes than dare to try and call the authorities in. In some villages, the nearest police station is 200Km away. Yet for the women we’ve met, a simple class in rights and advocacy has been enough to grow their confidence enough that they won’t take the beatings any moreme . They’ve struck out on their own, setting up collectives to create and sell handicrafts, keeping Kyrgyz artwork and traditions alive while at the same time making money for themselves. One lady we spoke to laughed about the banks and microfinance institutions she had borrowed from to buy materials and equipment in the past – “They ask why we don’t come any more for another loan, we say we don’t need them! We make more than enough now for all of us.”

Part of me wants to be angry that people have fallen so far and so fast. But I don’t really know what life was like here under communism: no-one mentions the political oppression, disappearances and state interference in life which must have happened. All we hear is that women were respected and had equal opportunity (whatever that meant under the Soviet system) and were represented by women’s councils in every district. I doubt that the Soviet era was as plentiful and liberating as some people have described it, but certainly there were some values which it taught that everyone agrees on.

But it’s impossible to underestimate the shock a society receives when one day they wake up and the government which told them where to work, where to live and how to live has gone. Perhaps, certainly in the poorest areas, the reversion to Lord of the Flies style madness is inevitable, and the new government really did have too many other issues to address – finding money, distributing land and so on – to maintain order. 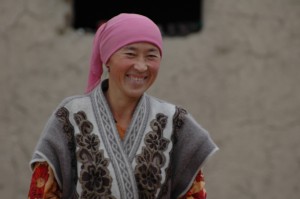 What’s surprising is that people here have any sense of humanity left at all. But they do, and many of the Kyrgyz customs – particularly when it comes to the treatment of strangers – are overwhelmingly generous. It’s a traditionally tolerant culture and it doesn’t take much to make people see that that tolerance should extend to each other too. One of our Red Crescent guides talked sadly about a ‘lost generation’, but what she showed us was the redeeming power of just a little information in the right place.

It will be years and a lot of money before all of Kyrgyzstan is as beautiful on the inside as it looks from without, but the work has clearly begun.